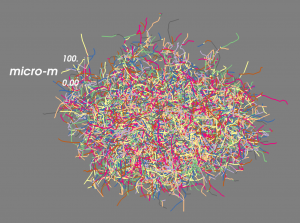 Based on such axonal trees we can then determine release sites from which dopamine is released into the extracellular space in the striatum. We have simulated how the released dopamine then diffuses in a 3D cube of striatal tissue over time. Figure 2 shows a 2D snapshot (i.e. a slice of striatum) at one time point, with the yellow blobs showing areas with a lot of dopamine. 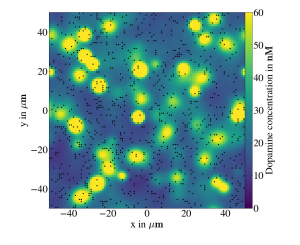 We use these simulations to find out how activity of dopamine neurons affects the concentration of dopamine in the striatum. Is the amount of dopamine very homogeneous across the striatum or are there temporal and spatial patterns?

Furthermore, we can simulate Parkinson’s disease by removing axons from the simulation. This might yield important insights into impaired dopamine signalling underlying some of the motor symptoms of the disease.

Finally, we can also simulate the effect of various drugs. For example, cocaine reduces the re-uptake of dopamine, which increases the overall dopamine concentration.