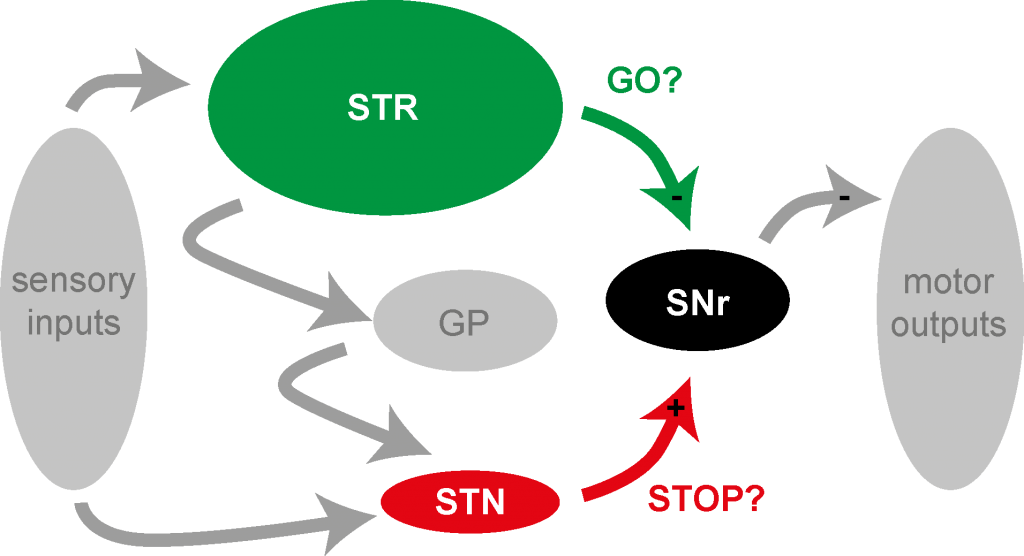 Animals constantly need to select and execute actions in order to ensure their survival (finding food, shelter, etc.). In addition, many parts of the brain are also busy with preventing animals from doing actions which might be harmful for them. The basal ganglia have been implicated in the selection and execution of actions, but also in the quick suppression of potentially harmful actions. Within the basal ganglia different pathways have been proposed to promote or suppress actions, respectively. Learn more about our ongoing research on inhibitory control here.

Dopamine is a neurotransmitter with complex, not well-understood effects. In the basal ganglia dopamine modulates cortical input to the striatum. We study the functional role of dopamine with computational models ranging from `low-level’ cellular models, over neural network models to `high-level’ reinforcement learning models. The goal is to understand how dopamine contributions to learn selecting good action (e.g. via synaptic plasticity) as well as the actual execution of actions (e.g. by changing motivational aspects of behavior). We apply our research result to clinical scenarios including Parkinson’s disease to study how pathological dopamine levels affect behavior. Learn more about our ongoing research on dopamine here.